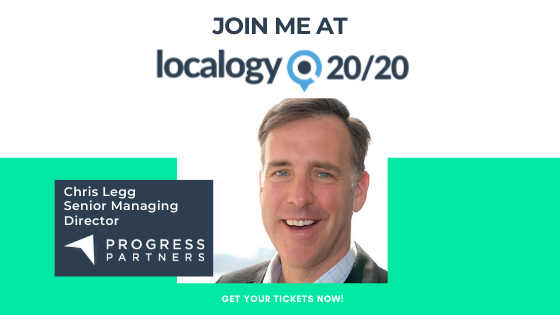 February 13, 2019 ? We [Localogy] recently had a chat with Chris Legg, Senior MD at Progress Partners, a Boston-based investment bank that has a strong focus on the SMB software space. The company also operates a small venture fund..

We thought it would be fun to chat with Chris about what?s hot in the SMB software space and how Progress evaluates the companies it represents or invests in. We also wanted to hear his views on some of the financial excesses of 2019, notably the implosion of WeWork and what impact it has, if any, on how investors will evaluate companies in 2020. Chris clearly singled out SMB fintech as a particularly hot area for investment today.

Here are some highlights from our conversation ? with a few audio clips included for those of you who prefer listening over reading.

Chris said it?s taken some time for investors to understand the nuances of working in the SMB software space, which in many ways operates by a different set of rules from enterprise.

?Our job as bankers is to match opportunities with acquirers,? Chirs said. ?We have gotten much smarter over the past couple of years in identifying who the investors are who get it.?

Many investors struggle with understanding how the SMB space differs from spaces they?re used to investing in, whether it?s consumer or enterprise. A big hurdle for many who are used to looking at enterprise companies is getting comfortable with the churn metric endemic to the SMB space.

?In consumer, the money comes quickly and it goes away quickly,? Chris explained. ?Enterprise is the opposite of that. And SMB is somewhere in the middle.?

In terms of product, Chris said the gap between SMB and enterprise is closing fast.

?There used to be enterprise and SMB. And those worlds were separate in terms of the services and software that were available,? Chris said. ?With the shortness of cycles to develop SMB specific solutions seeing a whole proliferation in solutions that only used to be available to enterprise.?

Chris talked about what he needs to see in a company that Progress will invest in or represent. It all comes down to credibility, he said.

?What we want to see is, this is where we want to get to and here is a credible path to get there. Where you lose us as potential investors or acquirers is if those plans are incredulous. For example, a growth rate that seems unrealistically high. Or a path to market that doesn?t seem credible or isn?t getting any traction,? Chris said.

?It almost doesn?t matter if they have a million or $10 million in sales. If their model is working, how they are engaging with and keeping customers, and the growth rate in getting new customers, that will sell all day long.?

If Chris has a pet peeve, it?s founders who try to pass off ?reoccurring? revenue as if it is ?recurring? revenue. The latter is subscription-based and predictable. The former is not, and is only as good as the last purchase.

He defines reoccurring revenue as ?acting subscription-like, but there is nothing contractually subscriptive about it. People often use the word recurring, no actually it is re-occurring. The stretch of the definition of recurring is definitely a red flag.?

We also talked about the bad press high-flying unicorns received in 2019, much of it related to WeWork, and whether that has created more space on investors? radars for smaller, steady growth software companies that want to be successful but don?t care about being unicorns. Chris argues those companies have always had access to capital, and even more so in recent years. But he doesn?t see it as a reaction to overinvestment in grandiose unicorns.

?Don?t forget that for all the unicorns that are valued over a billion and financing in hundreds of millions, if you were to do a bell curve of exits of SMB companies, you will find that the middle of that curve is in the tens of millions. Not hundreds of millions or billions,? Chris said.

He noted there are strategic buyers that have built up large companies based solely on acquiring SMB software startups that experience a growth stall out after they hit the $5 million to $7 million sales threshold.

?There are financial players that are getting smarter in that tens of millions of dollars size range. There is a path to liquidity for smaller companies in that size today that wasn?t as robust 10-15 years ago. But it is very robust today.?

Chris will be speaking at Localogy 20/20 on the following panel on March 18, the final day of the conference:

Session: The Private Equity POV and What?s Next

Billions in venture and private equity cash is pouring into local/SMB SaaS, raising the stakes ever higher. The big winners achieve unicorn status. Others see partnerships and strategic exits as their best options. This conversation among lenders and leaders in the money space helps us foresee the logical next moves among the most-watched local SaaS players.

Featuring Panel Discussion and Q&A with: